Last night I played Trivial Pursuit with some friends. It was the "Totally 80s" version of the game, where the questions focus on the wondrous decade that was the 1980s (whatever happened to plain old Trivial Pursuit? Now it's all 80s, 90s, SNL... So much for general knowledge!). Being the only member of the group who isn't American and being somewhat younger than my fellow competitors (as it was so kindly pointed out, I was the only one there who wore diapers during the 80s!), I expected a tough night.

It turned out that I was right! I answered very few questions correctly and didn't get a piece of pie until one player was full of pie and was trying to land in the center. It's not that this player was running away from the competition, as another player was one piece of pie away from a trip up the spokes, it's just that I was that bad! (My apologies to JollyRgr and L for not continuing the fine tradition of Pirate Trivial Pursuit!)

And what was this horrendously difficult question that I managed to answer using sheer guile and wit to earn my lonely pie piece, I hear you ask (well, I hear these voices in my head that I like to think are those of my diligent readers)...

"What Men-At-Work hit single introduced the world to the charms of Vegemite?"

It seems far too early in my blogging life to resort to the title "random musings", but "an ill-conceived collection of completely unconnected drivel" seemed a bit wordy...

- Last week I rolled all the pennies I've collected in the past 2 and 1/2 plus years and got them exchanged for cash... 550 pennies works out to a rate of 200 pennies a year, convincing me that Australia had the right idea when they scrapped the 1 and 2 cent coins so many moons ago...

- How on Earth did England win the one-day series so convincingly!?!? The best I can come up with is that the recent extreme heat across Australia has scrambled the brains of the English players enough for them to believe that they actually know how to play the game... (For any Americans who have stumbled across this blog and are confused by this entry, I am referring to the sport of cricket... and as I'm sure many of you have never heard of the sport, think of playing baseball with an ice hockey stick while wearing a gridiron helmet)...

- Science is a fickle game... For the past 2 years, I have worked with the fragment of a protein that behaves like a badly behaved child... it won't play nice, particularly with others, and on the rare occasion that it does seem to be behaving, you know they've done something that you just haven't found yet!... Now, I have just finished growing up the full-length version of the protein, and it's like the protein went straight to adulthood (complete with a steady job and a loving family), without hitting puberty...

- Random acts of kindness are the best kinds... Some time ago a student in the lab and I were discussing the Beatles when she suggested that her husband could give me a copy of there entire catalogue. I felt that this was a rather large undertaking, and when I hadn't heard anything further I decided that her husband felt the same... However, here I sit, thumbing through the entire catalogue of the Beatles, nicely labeled and packaged... A very pleasant surprise!
Posted by Goose at 1:11 PM 2 comments:

I watched my first Superbowl last night and, besides the half-time show and the commercials, I discovered that it's just another football game... I'm not sure quite what else I expected, but it was a bit of a letdown...

- Budweiser has good advertising executives. The Bud adverts were clever, with a nice twist to the story (be it the "dirty Dalmatian" or the football chess game with the witty repartee and that last second "gust of wind"). Meanwhile, the Bud-Light ads were pretty funny (being a "non-resident alien", I did enjoy the "English Classes"... I also enjoyed the "hitch-hikers" and the "Auctioneer/Priest").

- Siera Mist, Snickers, and Doritos should do not have good advertising executives, and the Emerald Nuts ad was just plain strange!

- FedEx are usually a safe bet for a good ad, and they proved this yet again with their "Moon Office" ad... but the FedEx shuttle touching down to "Final Countdown" was impossibly cheesy!

- The GPS system advert, made like an old Japanese Godzilla movie with the evil Map Beast facing GPS Man, was enjoyable... though I question the placement of GPS Man's laser, which appeared to fire from his navel!

- The Taco Bell lions were funny, while the E-Trade "things you can do with one finger" ad was great because it was such a simple concept.

- Hats off to Prince and all those involved in the Half-time Show!! It was pouring with rain, but everyone was professional and things went off without a hitch... Well done!!

Oh yeah, and apparently Peyton Manning beat the Bears...
Posted by Goose at 6:29 AM 6 comments: 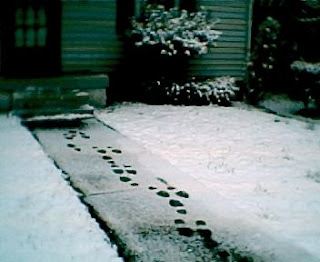 The snow arrived today. 2 inches of lovely white snow and it's still falling!
It's funny how it happened the day after I wrote about it... It makes you wonder who is reading this blog...
My apologies to all those weather men and women who I cursed yesterday.
Posted by Goose at 7:56 AM 2 comments:

Where is the Snow?

I was promised snow. They said it was coming. I saw the radar... it couldn't miss us. It was meant to snow all night and all morning.

We got no snow... well, we got a "light dusting". Please, I have more dust in my apartment.

I am from Australia... Western Australia to be precise (those of you familiar with a map of Australia will realize that W.A. takes up about 2/5ths of the country, so precise may not be the best choice of words). We don't get snow in Western Australia.

One of the joys of coming to the US of A was the chance to see snow; to see it fall, to see it accumulate.

Now, I understand that snow can be a pain. I also understand that I am in a part of America that doesn't get a lot of snow. I am fine with that. I just wish to point out that if you build my hopes up by telling me that we are definitely going to get snow, and lots of it, then we had better get more than a "light dusting"...
Posted by Goose at 7:45 AM 5 comments: